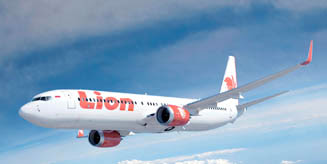 1. Background
Competition in the increasingly fierce business world requires every company to find a surefire strategy to win the competition Out sourcing as one of the strategies that are currently being talked about by many good people who praise and berate, let alone add to the success story Lion Air is very phenomenal. Because besides being a flight maskapi who is still young, it has also proven that cheap does not mean cheap. This company since its appearance for the first time has stolen the attention of observers of the business world especially the aviation business. How could it not be because of his act of selling with tickets at very cheap prices that has made Merpati and Garuda, which is a senior airline aviation company in Indonesia, bearded? Fire, because Merpati, which first ranked second in the market share of Airlines services, suddenly fell to third position. Garuda was no less made equal to the act of Lion who was initially considered a child yesterday afternoon suddenly perched in second place and continued to stick to Garuda's position both in domestic and overseas. Even the foreign airlines masapi airlines who want to enter Indonesia are not afraid of the existence of Garuda but instead consider Lion air as its main competitor when entering the Indonesian market.

Lion Air's success not only brought pride to Rusdi Kirana as the owner of PT Lion Mentari Airlines. But also the problem that has made him a little depressed as he expressed at a seminar at MM UGM on January 15 yesterday. He was briefly summoned by the House of Representatives and filled with questions about the outsourcing strategy he used. Well it looks like Rusdi Kirana is too smart for his brothers and sisters in this republic. It was not supported because it had helped provide services in the field of aviation to the lower class people who were often forgotten but instead were accused of trying to kill land and sea transportation, because the price of tickets from Lion air which was pegged to be cheap had taken many passengers from these two types of transportation.

2. Discussion
Actually outsourcing is not only dominated by airline companies. But long before the Lion Air case surfaced. Other industries have long used it as in the banking industry, where banks hand over information technology management to other parties, then the use of public accounting services is a form of outsourcing.
Outsourcing cannot be interpreted narrowly as an effort to cut costs by ignoring the quality element, as has been the benchmark for most people so far, which is "low price low quality". Lion Air can set ticket prices at a low price because in its operations the company submits matters other than its "core product" to other parties, such as catering, aircraft component procurement, and aircraft maintenance issues. The delegation of work carried out by Lion Air according to Rusdi Kirana revealed was equivalent to 1,300 Lion Air employees or around 30%. So that by delegating it to another party, Lion Air gets cost savings that makes it able to sell tickets cheaply (Warta Ekonomi, 2003)
Now is not the time for a company to handle all the work that is not the core of its business. Conversely, today's companies must think, if there are other parties who can do the work with lower costs and the same quality, or can also be better. So why not if the work outside the core business is left to other parties who offer outsourcing services.

The beginning of the thought of outsourcing in the business world is the existence of efforts to share business risks in a variety of problems, including employment - that is caused by developments that occur in social and cultural conditions and regulations in western countries in the early 20th century, not a few of the capital owners who complain that they no longer have the time to concentrate on products and services, customers and markets, as well as on quality and distribution. The reason they cannot concentrate properly is because their concentration has been spent on labor issues. There is a paradigm shift from the traditional work view that workers serve the system into a modern work view that the system must serve workers. With the outsourcing system formed in a company organization is a system of functions and processes, that is, outsourcing will serve workers in company organizations no longer need special people to serve and control the functions and processes that are outsourced. (Suwondo, 2003: 5-6)

There is a general secret in the workforce that many large companies do not or have not planned a career for blue collar workers for higher positions. But by implementing outsourcing provides opportunities for blue collar workers to be able to occupy higher positions. Rapid technological advancements require companies to quickly adapt, but the problem of adaptation is very expensive compared to existing needs. (Suwondo, 2003: 6-8)
In line with the times, the purpose of outsourcing which was originally to overcome labor problems, has now become increasingly complex. That has changed from just a strategy to solve a problem but is now used to support business goals and objectives (Suwondo, 2003: 11)
Outsourcing can be interpreted as delegating operations and daily management of a business process to an outsider (outsourcing service provider company). Things that can be delegated in outsourcing are certain functions and business processes to be embedded in the overall business operations of the company (Suwondo, 2003: 2 - 3)

There are some things that are recommended to be outsourced, namely things that are outside the company's core business so that the company can concentrate optimally on its core business. Meanwhile, what is not recommended for outsourcing is the core business of the company because it is the company's intellectual property that is a competitive advantage for the company
As performed by Lion Air, he delegated the process of care and provision of food that is not the core of his business to parties outside Lion Air, where both of these processes will be inserted in the overall business operations of Lion Air as an air transportation service provider.

2.2. Advantages of Outsourcing
2.2.1. Long-term Benefits
There are five long-term benefits if a company outsourcing, this will be explained as follows:

1. Increase the company's business focus
With outsourcing the company can focus only on the core business with a broader scale. Companies no longer need to be bothered by administrative and labor problems that arise. By delegating issues outside the core business such as food supply, maintenance and supply of aircraft parts. Making Lion Air can focus more on its core business, namely as a provider of air transportation services

2. Enter the world class ability
Indirectly, the outsourcing service provider company will bring the continuation of world class resources to be given to its clients, thus allowing access to new technologies and equipment and techniques that have not been used before. By collaborating with outsourcing service providers in the field of aircraft engine maintenance from Italy and procuring aircraft parts from a Danish company, Lioan Air can get access to new technology and the latest aircraft maintenance techniques with international standards. And this has made Lion Air able to enter into world class capabilities.

3. Accelerating the benefits of new technology
Outsourcing service companies usually supplement their services with modern equipment because of the need for their work capacity. By handing over aircraft engine maintenance from Italy and procuring aircraft parts to the outsourced provider, Lion Air makes planes that have better performance and are capable of serving 88-100 flights. And this of course provides a great advantage for Lion Air.

4. Divide business risk
A very large investment risk in a company, especially in political and socio-economic conditions. By outsourcing, Lion Air will not bear a large business risk because Lion Air will only bear business risks for its core business, while business risks involving outside the core business are borne by the company providing the relevant outsourcing services.
5. Using existing resources for more strategic activities
By outsourcing, all activities that are not the company's core business will not be a burden anymore. All available sources can be focused on the core business, such as activities to provide more services to customers and others. With Lion Air's more focused attention on providing services in the field of aviation services, due to outsourcing. So slowly but surely Lion Air began to improve its services, as evidenced by the availability of wide-bodied aircraft such as the Boeing 777 and Boeing 747 to serve routes from the field to foreign countries.

2.2.2. Short-term Benefits
While the short-term benefits to be gained by companies that carry out outsourcing are:

3. Resources do not need to be available internally
By outsourcing, the company can overcome its limitations in meeting the needs of resources in its organization. Inability can be caused by costs that are too large to meet the needs of the resources needed. Due to the limitations of aircraft engine maintenance facilities rather than having to make their own, Lion Air chose to submit aircraft maintenance to companies that provide outsourcing services in the field of aircraft engine maintenance.

2.3. Lack of Outsourcing
Although the idea to outsource is very interesting, but it should also be remembered that everything must have a favorable and less profitable side, in this case the risk of outsourcing is

3. Conclusions
The outsourcing strategy adopted by Lion Air has made this company able to become a pioneer in the field of low fare airlines in Indonesia. Selling tickets at low prices, without sacrificing the quality of the services provided, is a competitive advantage owned by Lion Air from implementing this outsourcing strategy. Lion Air can concentrate more on developing its services in accordance with its core competencies, because matters that are not core competencies of Lion Air are left to other companies that do have expertise in the field.