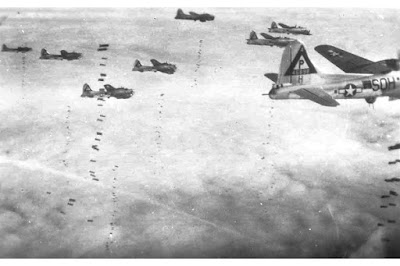 During the second world war both German and Japanese allies often used the B-17 Flying Fortress, Ju-88, and Nakajima bombers in large numbers, where each bomber's stomach was crammed with dozens of bombs which would later be dropped on the intended target. With the hope that 20% or up to 50% of the dozens or hundreds of bombs dropped can hit the desired target precisely, this is called the carpet bombing strategy. But it is different from what happened when America and its allies carried out desert storm operations, with progress current technology, which has found a type of bomb that can be guided with a laser beam so that it has a high level of accuracy and explosive power, it is no longer necessary to use many bombers to carry out bombings. Just by using an F-117 Night Hawk or B-2 Spirit stealth bomber by carrying a laser guided bomb then the desired target is definitely destroyed, and this strategy is called smart bombing.

This aerial bombing strategy can be used as an analogy for global companies who want to successfully compete in emerging markets. Circumstances where customers no longer want to be treated the same as what has happened in the era of mass marketing that treats customers with the same treatment regardless of the needs and desires of individual customers, now customers want to be treated differently according to their individual needs and desires. In short, the company is no longer able to carpet bombing to conquer the market, but must switch to using what is called smart bombing.

It's no longer the time for a company to do mass production, mass distribution, and mass promotion of a product to all buyers. As Henry Ford said that "he would offer T-type Ford cars of various colors as long as they were black" the same was done by Coca-cola, namely by marketing one type of Coke in a 6.5 ounce bottle.

But with the circumstances where different customers want to be treated differently then what is said by Henry Ford is no longer appropriate to be applied. Instead the current company is amazon.com, Levi’s, Barbie, Acumis, Paris Miki, De Beers, Andersen Windows, and ChemStation. They no longer treat their customers en masse but individually. Because they realize that no customer has identical needs and wants. They offer products that are tailored to the needs and desires of customers, provide services according to the wishes of individual customers, they no longer bombard all consumers with mass advertising. But they are more segmented or focused on the intended segment, this right impacts the use of promotional media used. They do not always use newspapers, magazines, leaflets and others but their use is tailored to the intended segment, they may use the internet to deliver messages to consumers who often use the internet as a communication medium. Or use cosmopolitan magazines to market women's clothing products.

The company cannot serve all customers in a market. This is because the number of customers is very large and diverse in their requests. Therefore companies need to identify market segments that can be effectively served.
The reason for choosing this problem1. Why now companies must use segmentation, and what is segmentation2. How is the development orientation in segmenting the market

With the development that shows that promotion media and distribution channels are increasingly difficult and are accompanied by increasingly expensive promotion and distribution costs if used to reach consumers en masse. So many companies move from mass marketing to micromarketing, which is no longer targeting the mass market (a shotgun approach) but targeting customers who have the possibility to be optimally satisfied (a rifle approach). According to Kotler (2003: 278 - 283) states that there are four levels or levels in segmentation which will be explained as follows:
1. The first level is Segment marketing, is a market segment that consists of a group of customers who have the same desires. Noteworthy is that we should not be confused to distinguish between segments and sectors. For example: A car manufacturer is targeting young, middle-income car buyers as buyers of the products it offers. But the problem that arises is that young, middle-income car buyers do not have the same desire in choosing a car, some of them want a car at a cheap price while others want a car at a high price. The situation above shows that young, middle-income car buyers cannot be called a market segment, but are referred to as a sector.

Marketers do not create segments, but it is the task of marketers to identify segments and decide which segments will be made as a target market. By using market segmentation, the company will get many advantages compared to using the concept of mass marketing. Whereas by using market segmentation, the company can create a product that is in accordance with its target market besides that the company can more easily choose distribution channels and communication channels. And can also have a clear picture of its competitors.
2. The second level is Nice marketing, Niche defines groups to be narrower than the marketing segment. Because niche marketing will divide marketing segments into smaller groups or sub-segments. For example, cement from brat smokers is further divided into two sub-segments, namely heavy smoking sub-segment who wants to quit not smoking and sub-segments who still want to continue smoking.

The appeal of niche marketing is that the niche provides a clear picture of the needs of consumers, and consumers are willing to pay a premium price to the company to be able to satisfy their needs and desires. Niche markets will not attract the attention of competitors, nicher will benefit from specialist and niche has the size, profits, potential growth. For example Estee Lauder, the four best selling prestige parfumes are owned by Estee Lauder. Seven of the top 10 prestige makeup products also come from Estee Lauder, some consumers realize that they have bought products from Estee Lauder. This achievement obtained by Estee Lauder was obtained because the company specializes in marketing brands intended for women with a variety of needs.

This is not just a matter of customs, but also business practices. Starting from the use of local people in key positions, who is used as a strategic partner, to how much variation in the implementation of strategies that can be done. A multinational company in Indonesia, for example, dares to use a local advertising agency, even though its parent in the country of origin has a contract with a global advertising agency. Or, my office is now being asked to provide strategic advice by a number of global companies, even though at the global level it has a relationship with a global consultant. Such steps will not emerge if the multinational company does not see the unique Indonesian market.

Starting from Unilever who found tough opponents from local players in the toiletries business, to steps taken by a global bank that attracted a local bank executive to be its top leader. This proves that the Indonesian market does have its own uniqueness.
if you don't have a good local marketing program, multinational companies operating in Indonesia will not be able to repeat the success stories they have achieved in their home markets or in global markets.

4 4. The fourth level is Individual customer marketing, This is the highest level of segmentation, where this concept leads to "segment of one", "customized marketing" or can also be called "one to one marketing". This concept holds that each individual has unique needs and desires that differ from one individual to another individual, in fact this concept does not fully contain new things because in ancient times a long time before the era of the industrialization revolution which resulted in the emergence of mass marketing, the traders have made products that have been tailored to the needs and desires of their customers individually. But the difference is that companies are now equipped with computer technology to create databases that contain information about customers and internet technology to facilitate interacting with customers individually, so that with such technology, companies can now even customize their products. so that it can meet the needs and desires of its customers individually.
This concept of individual customer marketing is used by companies such as Barbie by using the media www.Barbie.com where on this site customers can make Barbie dolls in accordance with their desires ranging from designing clothes, accessories, and names of the Barbie dolls. Customers can even fill out online forms for information about the likes and dislikes of their dolls. And when the doll is sent to the customer concerned the doll is accompanied by the name and personality of the doll that has been written on the packaging of the doll. While Levi's jeans manufacturer has launched an in-store customization concept called "original spin", which offers more choices and features for all of its customers. Also, please note that Levi's is able to produce 5,700 different jeans choices, by means of combines 227 kinds of waist size with 25 kinds of foot length whose purpose is to meet the needs and desires of its customers individually. De Beers, the jewel ring maker company provides an opportunity for its customers to design their own ring that they want by combining 189 unique combinations of the shape and size of the ring and the gems they want to use.

Unlike mass production which limits the human need to interact, mass customization has made relationships with customers something very valuable. By doing customization, companies can empower customers to design products and services based on their own choices, the company only has to provide a set of equipment to customers to design the products they need and want. Nowadays switching to individual customer marketing is not an option but is a necessity because reality has proven that no customer has the same needs and desires, because companies must treat different customers differently.

From the discussion above, there are a number of things we can learn as lessons:

1. The company cannot serve all customers in a market. This is because the number of customers is very large and diverse in their requests. Therefore companies need to identify market segments that can be effectively served.

3. Nowadays switching to individual customer marketing is not an option but is a necessity because reality has proven that no customer has the same needs and desires, because companies must treat different customers differently