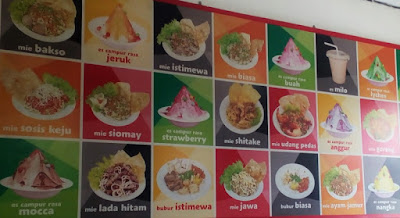 Mie Bromo Pojok dumplings are precisely in the Klojen area, but there are also branches in Foodcourt 3rd Floor, Malang Town Square. At that time it happened to be right at Matos again, so try it at the Matos food court. The menu is a lot, but he said his favorite menu is Mushroom Noodle Dumplings and Black Pepper Chicken Dumpling Noodles. At that time I also tried the Black Pepper Chicken Dumpling Noodle.

The price is quite affordable if it is for student pockets. Really suitable for a girlfriend .. (personal experience ,, hehe). Matter of taste, is comparable to the price. There is a price, there is a quality of taste. But if it's a problem with portions, maybe it's still lacking if it's for the stomach of a student ... hehe

Besides offering a menu of noodles and meatballs, Bromo Pojok also provides an artistic Ice Mix. Ice Campur is pegged at Rp. 7,000 which is very attractive to visitors. Unfortunately at that time it was rather cold, so I haven't tried the Ice Mix. Maybe next time if you stop by again, you must try the Ice Mix