Marketing in the world of politics 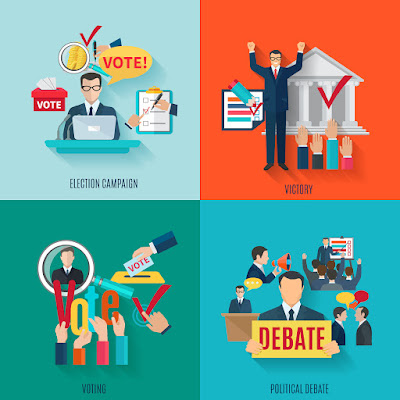 Marketing plays an important role for political institutions. The purpose of marketing in politics is to help political parties or candidates to become better acquainted with the people they represent, then to develop work programs according to the aspirations of the people supported by the use of good political communication. The marketing concept offers a solution that can be used so that candidates are closer to their constituents. In addition, Butler and Collins saw a change in voter behavior patterns so that the concept of marketing was considered important to do.
Environmental research, including issues, opportunities, and threats that will be faced by candidates. The area of ​​environmental research also means understanding the conditions of all fields in power struggles, such as local economic realities, electoral rules, community desires, critical issues that are developing, socio-demographic factors, income, education, lifestyle, and different segments.

Candidates must see clearly that voters are not homogeneous, but heterogeneous or consist of different segments, for example, seen from age, income, education). The campaign team identified the entire voter segment, including segments from registered voters who might or did not vote in the election. After the segmentation is finished, it is continued by identifying the voter target that can be won by its vote, then placing it (positioning) in the form of planting a candidate's image.

The next step is to decide how to apply marketing strategies, how to set goals in measurable terms based on priorities. Prioritize the image, the concept of appropriate issues and policy choices, and how to convey the message that will be the candidate's image and as a selling point.
In this fifth step, candidates are required to be able to use marketing tools such as products and promotions. Candidates must understand effective and efficient ways such as with regard to funding, media publication selection, organizing campaign teams including fund staff, interest groups, party members, volunteer support.

The final step is to focus on expenses, the number of messages to be delivered, the number of votes that must be obtained. The key lies in the form of support from donors of funds, media support, party support, constituents.
Marketing emphasizes the ability of candidates to understand the wishes of the community or in other words the candidate must be market-oriented, but that does not mean the candidate must do all the market's desires because it will obscure the candidate's ideology and values. Market orientation can be divided into four stakeholder orientations, namely orientation
voters, competitor orientation, internal orientation and external orientation.8 High or low popularity, candidates will be largely determined by the voter community, developing issues, and track records. This can be known through regular market research and polling. However, the use of market research is preferred because it is considered more comprehensive in understanding voters, competitors, and parties involved in the political marketing process.
The benefits of market research include, first, to understand the behavior of the community, competitors, and the latest trends in the political field. Second, it allows parties to dig up information through intelligent markets. Third, to reduce information bias. Fourth, can produce information that is useful for input for internal and external political party decision making.

Understanding candidates is the most important thing for applying marketing in the political domain. Through market research, a strategic approach that is suitable for a heterogeneous voting society will be found. This diversity can be called segmentation. Voters' character differences can be seen from their educational background, occupation, religion, and environment. Each group needs a different approach, this is what the candidate needs to understand and process. From the different segments, there will be found ways to communicate and build interaction with the community.

After knowing the segmentation of the voting community, the thing to note is positioning. Positioning in marketing is defined as all activities to instill an impression in the minds of consumers in order to distinguish the products and services produced by the organization concerned. The goal is for consumers to easily distinguish the products produced by one company with products produced by other companies. Implementation in politics, for example, candidates use slogans, brands, images, or certain jargon that is easy to remember and is inherent in the minds of voters.

Marketing mix is ​​also important as marketing implementation in the political domain. can be explained with the classic 4Ps popularized by McCarthy (1960) and popularized again by Niffeneger (1989), namely product, promotion, price, and place in political campaigns.10 Explanation of 4Ps in commercial marketing differs from marketing applied to politics.


Products in commercial marketing can usually be seen and felt (tangible), while in politics, products according to Niffeneger (1989) are (1) party platforms, which contain concepts, identities, ideologies, and work programs. (2) records of things done in the past, relating to what the candidate has done in the past, good or bad contributions. (3) personal characteristics, in the form of symbols, images, and credibility of political products.

Promotion, related to ways to communicate with voters. The development of communication technology makes candidates in this era use media facilities or advertising agencies in building image and campaign slogans to attract the interests of voters. In the era of communication technology, television, radio, and cyberspace facilities are even used as media for delivering political messages. It should be noted that not all media is appropriate for promotion.

The third point in the marketing mix is ​​price. Price can be interpreted as the price paid by the candidate covering the economy, that is, expenses during the campaign period. The second aspect, psychological, refers to the price of perceptions from the voting community to candidates. Third, the national image, namely the positive image of the candidate version of the voting community. Positive image or can be called image is closely related to the identity of a figure. Political images do not always reflect objective reality, but can also depict unreal things or imaginations that are different from physical reality, such as charisma or a fair queen. It is important to know that images can be created and weakened.

The last point is place. What is meant by place here is a place to present the message that the candidate wants to convey must touch all levels of society. This can be done by identifying segments and positioning correctly. The delivery of messages through visits or face-to-face meetings with the voting community or using modern communication technology media facilities must be adjusted to the reality of the voting community.

Application of marketing in the political domain is more widely applied in Western countries with different implementations, mixtures and results. For example, the victory of Bill Clinton by using the concept of marketing. Bill Clinton's words, movements, and actions in dealing with the American political world are done in such a way as a result of market research involving marketers.11 So is the involvement of Saatchi, a marketer who won Margaret Thatcher to occupy the seat of British Prime Minister in 1979. The two examples illustrate the involvement of marketing experts who use marketing instruments to succeed political candidates.

It is clear then, that the concept of marketing broadly contributes to influencing politics as a new phenomenon in the arena of political competition. The basic difference regarding the initial assumptions of marketing applications in politics and marketing in the commercial world can be seen in the 4Ps marketing mix along with segmentation and positioning as well as the process in which competition takes place, on the other hand consumer affiliation in marketing and consumers in politics are different.