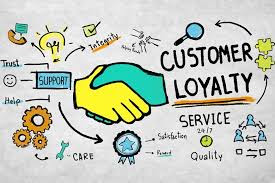 As with emotions and satisfaction, loyalty is another concept that seems easy to talk about in everyday contexts, but becomes more difficult when analyzed in its meaning. According to Assael (2001: 103) the concept of brand loyalty is a repeat purchase because of a commitment to a brand, conversely lethargy (inertia) is a repurchase without commitment. For brands that are less important, if the brand has a profitable reason, consumers might buy back because it will not waste time spent in the decision making process.

The classical condition displays behavior as the result of a closest combination between a primary stimulus (social success) and a secondary stimulus (a brand).

Instrumental conditions describe behavior as a function of appraising approval of buying behavior that leads to satisfaction. Whereas cognitive learning describes learning as problem solving and focus on changing forms of consumer psychology (consumer behavior and profit desires) as a result of learning (Assael, 2001: 106). The detailed description of the learning theory above can be illustrated in the picture below.

After the learning phase, the next stage is the habit phase. Habits can be interpreted as a result of repeated behavior within a boundary or lack of information seeking and evaluation of alternative choices (Assael, 2001: 122). After going through the habit stage for a certain period of time, a consumer will find a form of brand loyalty

Meanwhile, according to Dharmmesta, 1999: 74 from Dick and Basu, 1994 loyalty can be understood as a concept that emphasizes the sequence of purchases. If the definition of customer loyalty emphasizes the purchase sequence, the proportion of purchases, or also the probability of purchase, this is more operational, not theoretical. To strengthen the substantial understanding of loyalty requires a theoretical review of the concept which is also intended to strengthen the basis of understanding in research. The definition of customer loyalty which is based on a behavioral approach is still inadequate to explain how and why brand loyalty is developed and / or modified.

According to Dharmmesta (1999: 74) the concept of brand loyalty needs to be clarified before the development of the method of operationalization (measurement) is carried out adequately. The clarification involves ideas related to the attitudinal approach as psychological commitments and behavioral approaches that are reflected in actual buying behavior.

According to Dharmmesta (1999: 77) loyalty develops in four stages: cognitive, affective, conative and Action This review estimates that consumers become loyal first to the cognitive aspects, then affective and finally to the conative aspects. In this case the three aspects must be aligned, although the literature on dissonance shows that not all cases experience the same thing (Dharmmesta, 1999: 77 quoted from Oskamp, ​​1991).

The First Stage: Cognitive Loyalty
Consumers who have this first stage of loyalty use an information base that forcefully points to one brand over another. So, loyalty is only based on cognition. For example, a supermarket always offers a lower price than existing competitors. This information is enough to force consumers to always shop at the supermarket. Is this a form of strong loyalty? In reality this is not the case, with the reason that other supermarkets can offer more interesting information, consumers can switch to other supermarkets. So marketers must have even more compelling reasons for consumers to remain loyal.

Second Stage: Affective Loyalty
The second stage of loyalty is based on the affective aspects of consumers. This attitude is a function of cognition (expectations) in the initial purchase period (pre-consumption period) and is a function of the previous attitude plus satisfaction in the next period (post-consumption period).
The loyalty of this stage is much more difficult to change, unlike the first stage. Because loyalty has entered into the minds of consumers as affect rather than alone as cognition that is easily changed. Effects have properties that are not easy to change, because it is integrated with the overall consumer cognition and evaluation of a brand (Dharmmesta, 1999: 79, quoted from Oskamp, 1991).

The emergence of affective loyalty is driven by satisfaction. But it still doesn't guarantee loyalty. According to research, customer satisfaction is highly correlated with the intention to repurchase in the future. Intention expressed, or even once a repeat purchase can not show loyalty, although it can be considered as an early sign of the emergence of loyalty (Dharmmesta, 1999: 79).

Stage Three: Conative Loyalty
Konasi shows an intention or commitment to do something intention or commitment to do something towards a particular goal. So conative loyalty is a loyal condition that includes a deep commitment to make a purchase.
This type of commitment has gone beyond affect, part of motivational property to get a brand that you like. Affect only shows motivational tendencies. While the commitment to do shows a desire to take action. The desire to repurchase or be loyal is only an anticipated action but has not yet been carried out. To complete the loyalty sequence, one more stage is added to the cognitive-affective-conative model, namely the loyalty of actions (Dharmmesta, 1999: 79).

Stage Four: Loyalty of Action
Conative aspects or the intention to do has undergone development, which is converted into behavior or actions or control actions. In the sequence of action control, the intention followed by motivation, is a condition that leads to readiness to act and to the desire to overcome obstacles to achieving that action. So the action is the result of meeting these two conditions. In other words, future action is strongly supported by the experience of achieving something and resolving obstacles. This shows how loyalty can become reality, first as cognitive loyalty, then affective loyalty, and conative loyalty and finally as action loyalty (loyalty supported by commitment and action) (Dharmmesta, 1999: 79).
Location: