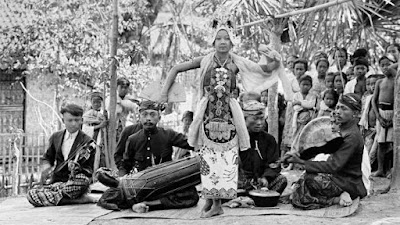 They are the descendants of the people of the ancient Kingdom of Blambangan, whose rulers remained Hindus until they were forced to convert to Islam by the Dutch East India Company (VOC) in 1770. Their population of approximately 400,000 is centered in the province of East Java in the Banyuwangi Regency. According to the Central Bureau of Statistics in 2010, the Osing people are a sub-ethnic of the Javanese people.

The Osing people are settled in several districts in the central and northern regions of Banyuwangi Regency especially in Banyuwangi district, Rogojampi district, Sempu district, Glagah district, Singojuruh district, Giri district, Kalipuro district and Songgon district. The Osing community or also commonly known as Wong Osing by some circles and as a result of research, are considered as the natives of Banyuwangi Regency, including an area at the easternmost tip of the Java island that is also known as Blambangan Peninsula. This community of people are spread throughout fertile farming villages in the central and eastern regions of Banyuwangi Regency, administratively includes districts such as Giri, Kabat, Glagah, Belimbing Sari, Rogojampi, Sempu, Singojuruh, Songgon, Cluring, Banyuwangi (city), Genteng and Srono. In the four later districts, integration with non-Osing people occurs usually with migrants from western East Java, Central Java including Jogjakarta; which the Osing people refer them as Wong Jawa Kulon (Western Javanese people).

The history of the Usingnese date back to the end of the 15th century, at the time of the fall of Majapahit; to resist conversion to Islam, many of them fled east to Banyuwangi, Bali and Lombok. Much of Java were converted to Islam by the Muslim Makassars in the 16th century. The remaining Hindu princes from Majapahit established the Kingdom of Blambangan, which stretched from the Blambangan peninsula right up to the Tengger mountains of Central Java. Blambangan held sway for slightly more than two hundred years before they finally surrendered to the second Mataram Sultanate in 1743, and the eventual Islamization of the Osing people. Even then, it did not officially convert to Islam until the 19th century, though small communities of Muslims do pre-exist this date. The cause of the Osing's conversion is that, during the 19th century, when Banyuwangi was still unscathed by the Dutch colony, but knowing that by launching an attack on Banyuwangi, they will lose out in the battle as the Hindu principal puputan was a fight-to-death, (as occurred previously in the Puputan Bayu War or Blambangan War in 1771-1773) the Dutch sent Muslim and Christian missionaries to tame the fighting spirit. Only then Banyuwangi was captured, a long and ambitious dream toward further occupation on Bali was launched by the Dutch. In spite of the Dutch attempts to propagate Islam and Christianity among the Osings, many still stuck to their old beliefs. Today, a large Hindu population still exists among the Osings.

During the early formation of the Osing community, the main religion of the Osing people is Hinduism, just as it is during the time of Majapahit. However, the development of Islamic kingdoms along the north coastal region (today it's the North Coast Road (Java)) have caused a faster spread of Islam among the Osing people. The development of Islam and other foreign influences in the Osing community was also influenced by the efforts of the Dutch East India Company to control the Blambangan Peninsula region. The Osings are mostly adherents of abangan Islam, although there are some who still follow Hinduism. Elements of animism can be seen in their religion too. The Osings share a similar culture and spirit with the Balinese, and the Hindus celebrate ceremonies like Nyepi. Just like the Balinese people, the Osing people also share the puputan tradition. It is not uncommon to see mosques and puras (Hindu temples) to be built nearby to each other in Banyuwangi. About 2,000 to 3,000 of them are Christians, who also mix some Hindu or Muslim beliefs into their religion.

The main profession of the Osing people are farmers with a small number of them are traders and officers in formal areas of employment such as teachers and local government officials.

The Osing people's various art forms are unique and contains mystical elements just like their Balinese and Tenggerese relatives. The main art form is their popular version of Gandrung traditional dance, Patrol, Seblang, Angklung, Barong dance, Kuntulan, Kendang Kempul, Janger, Jaranan, Jaran Kincak, Angklung Caruk and Jedor. Other art forms that are still preserved is the nursery rhyme, especially among school children such as Jamuran and Ojo Rame-Rame. These short poem nursery rhymes in general are used to accompany during children's play. Apart from adding a cheerful atmosphere when children are playing in groups, these nursery rhymes can work to teach positive values in early childhood. Jamuran nursery rhyme teaches about communal work, while Ojo Rame-Rame teaches patriotism.

The government of Banyuwangi Regency sees great potential in the culture of the Osing people by establishing Kemiren village in Glagah district as a customary village that preserves the cultural values of the Osing people. Kemiren village is also a tourist destination that is popular among the Banyuwangi people and its surrounding communities. Cultural festivals and annual artistic events are often held in the village.