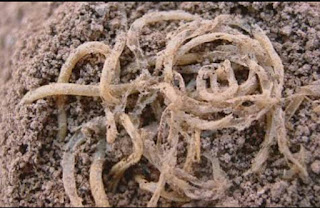 4,000-year-old noodles discovered in China by John Roach for National Geographic News on October 12, 2005 A 4,000-year-old bowl of noodles found in China is the earliest example ever found of one of the most popular foods in the world, scientists report today. It also shows that it was not Italy who first discovered noodles for staple dishes. Long, beautifully preserved thin yellow noodles were found in a bowl sealed upside down at Lajia archeological site in northwestern China. the bowl was buried under ten feet (three meters) of sediment. 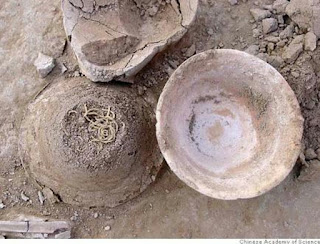 The scientists determined the noodles were made from two types of millet, wheat native to China and were widely cultivated there 7,000 years ago. Modern North American and European noodles are usually made with wheat. Archaeochemist Patrick McGovern at the University of Pennsylvania Museum of Archeology and Anthropology in Philadelphia said that if the dates for the noodles were correct, the findings were "quite amazing." Even today, he said, deft skills are needed to make long, thin noodles like those found in Lajia. "This shows a fairly high level of food processing and culinary sophistication," he said. History Noodles Noodles have been a staple food in many parts of the world for at least 2,000 years, although whether the modern version of yarn pasta was first discovered by Chinese, Italians, or Arabs is debatable. Before the discovery of noodles at the Lajia archaeological site, the earliest records of noodles appeared in a book written during the Eastern China Han Dynasty sometime between AD 25 and 220, Lu said.

Another theory suggests that noodles were first made in the Middle East and introduced to Italy by Arabs. Italy is widely credited for popularizing food in Europe and spreading it throughout the world.

Additional evidence is needed to prove that the noodles found in Lajia are the ancestors of either Asian noodles or Italian pasta. "But in any case, the latter was only documented two thousand years later," Lu said. Gary Crawford, an archeologist at the University of Toronto in Mississauga in Canada, said finding 4,000-year-old noodles in China was no surprise. "This matches what we normally know - that noodles have a long and important history in China," he said. sleuthing ingredients To determine what noodles are made from, Lu and colleagues compared the shape and pattern of starch grains and seed husks in noodle bowls with modern plants. The team concluded the noodles were made from two types of millet-Broomcorn millet and millet. the wheat is ground into flour to make the dough, which may then be stretched and stretched into shape. Barley alone, the researchers say, not having the stickiness needed to allow the dough to be stretched and stretched to the string. While archaeological evidence shows wheat was present in China 4,000 years ago, it was not widely cultivated until the Tang Dynasty (AD 618-907), Lu said. According to Crawford, the fact that the noodles are made from millet is not surprising. his own research on the same site in northern China shows enough millet and rice but very little wheat. However, he added, the well-preserved discovery of millet noodles helped explain the lack of wheat germ found at several archeological sites. "One of the suspicions is that wheat seeds are made into a type of food through boiling and flour production. That doesn't necessarily leave much in the way of grains to ... recover," he said. "... And if they make noodles, that will explain it." According to Lu, in poor rural areas of northwestern China, millet is still used to make noodles. "These modern millet noodles have a harder texture than wheat noodles, so they are commonly called iron-wire noodles," he said.