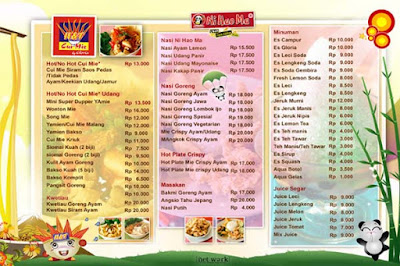 Traveling to Malang, it's not complete if you haven't had a culinary tour in this city located in East Java Province. Make no mistake, not just poor meatballs, lo, this typical city of Apple food. Many others. Among these are cui mi.

But, if you are looking for the first store to stand, point your vehicle to Jalan Kawi Atas, precisely at Ruko Kawi Atas 43B. This two-story shop can accommodate about 32 visitors at once.

As the name implies, the mainstay of this shop is cui noodles with various sprinkles, such as chicken, shrimp, mushrooms, shrimp, and snapper. You can choose according to taste.

Only, you need to wait a little because cui noodles require a non-instant cooking process. While waiting, you can order crispy fried chicken skin or shrimp spring rolls. This food presentation is faster so it is suitable to be a friend to spend time.

The contents of spring rolls in this shop are different from the contents of most spring rolls, namely shrimp and chicken meat that has been finely chopped. It tastes delicious like dimsum. The crispy fried chicken skin has a crispness and savory taste that is addictive. "The flour mixture is different from the usual, but the recipe is secret," said Siany Dewi, owner of the shop that was founded in 2008.

Fried chicken skin is served with spicy and sweet sour sauce. While prawn spring rolls are accompanied by a thin, sambal swekiau sauce, but the spicy kick.

Eat a "bowl" of noodles

After being satisfied eating the appetizer, the cui noodles finally arrived. The method of presentation in this shop is unique. Inside the ceramic bowl, there is another bowl that you can eat. How come? Relax, the point is a large sized fried dumplings that are concave like a bowl.

Siany said, the idea of using fried dumpling bowls blaze because she and her husband like something crispy as a dining companion.

On top of a bowl of fried dumplings, there are noodles, mustard greens, toppings, and a reddish sauce, with appetizing slices of onion. Apparently, that reddish sauce that led to the word hot in front of cui mi. "That is, not hot, but spicy," explained Agus Ariyanto, supervisor of this shop.

With cui noodles, a small bowl of clear soup is served with a sprinkling of chopped garlic, leeks, and pepper powder. But, you should not pour this sauce into the noodles. Honey, right, if the distinctive taste of noodles will be dispersed?

Even though you're hungry, try tasting the reddish sauce first. Wow, so puedes. In addition to onions, it turns out there are also large pieces of green chili slipped behind the reddish sauce.

How to eat cui noodles just like you. But, mix everything together with chopsticks. The taste of the sauce that was pungent, for some reason, tasted more "tame" when mixed with noodles.

Minya is small and clean in color. The texture is really fluffier, soft, and chewy. The aroma of onion oil which is used to smear the body after it is boiled faintly smells delicious.

To make chicken toppings, this shop is frying thinly sliced chicken with flour. Thus, not a sprinkling of regular seasoned chicken meat you can, but crispy flour fried chicken.

While eating noodles, occasionally sipped broth broth. It's tasty and slightly spicy from pepper. "We use chicken bones to make broth," Agus said.