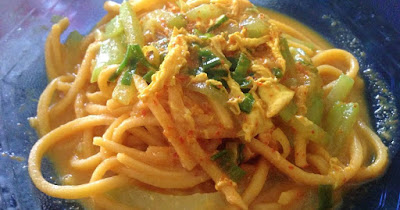 Mie Gomak is a food that is well-known as a regional specialty from the Toba Batak land, covering all of the Toba Batak regions, and is also a special dish in Sibolga and Tapanuli.
Regarding the origin of the designation for this menu various versions.

Some mentioned, maybe because of the way it was provided, it was used (held by hand) until now called gomak noodles, although in the end they didn't hold it with their hands when serving it.

Boiled noodles are usually made separately with gravy and chili sauce. Although there are many variations to make this typical Batak food menu, some use gravy and some are made like fried noodles. The taste is very unique when gomak noodles are mixed with herbs from the Batak land namely Andaliman.
Location: