The History of Mie bangka

March 11, 2017 Post a Comment
Bangka noodles are one of the special foods of Bangka Island that are worth a try. This noodle is quite famous all over Indonesia especially in big cities. If not traveling, Bangka noodles are the same as other local specialties, such as Jogja noodles and Acehnese noodles that have opened restaurants in many places outside the region.

Bangka noodles are not much different from other typical regional noodles. Some of the defining differences are the taste and ingredients used. Bangka noodles are said to be the chicken noodles of Bangka Island with a sprinkling of chicken or other meat.

Although Bangka noodles have become a special food, these noodles are actually Hakka or Khek foods. This traditional Chinese dish is brought by the Han to this once tin-rich island and then blends in with the local culinary tastes. On Bangka Island, this noodle is called mien.

The Hakka people are scattered and mingled with the people of Bangka Island. Aside from Bangka Belitung, it is also spread in Kalimantan and Java.

Distribution of Bangka noodles to other areas then make adjustments to the local tongue.

In their area of origin, there is something special that is a mixture of tofu or original Bangka tofu. Vegetables are complementary as usual in chicken noodles, there are mixtures such as leeks and bean sprouts.

For those of you who like street food or street food, hunting for Bangka noodles Bangka noodles are worth a try, especially in big cities. Culinary noodles can add to the experience of feeling the typical noodle in the archipelago.

The price of Bangka noodles is also not too high. Bangka chicken noodles are worth a try especially when you travel to the island in Bangka Belitung Province 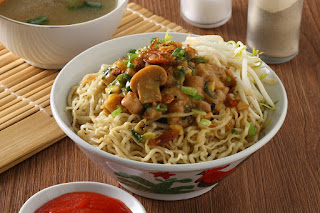