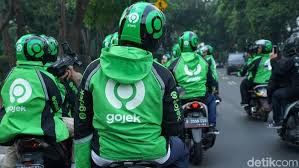 The level changes are as follows:

1. Originally ojegs only operated in their respective regions, now they can operate with a wider area, at least within a radius of 25 Km or it could be more. For example: East Jakarta motorcycle taxi ojek tends to operate and compete with fellow motorcycle taxi drivers in the area. The impact of East Jakarta go jek driver will compete with almost all gojek drivers in Jakarta.

2. Target markets that used to tend to work on certain geographic target markets are now getting wider geographical areas, not only geographically expanding but in terms of demographics such as the type of work that used to be a c2c retail end user now serving business owners alias b2c, such as the owner restaurants can use the go food menu for delivery as well as promotion and distribution channels, business owners and offices can use the menu go courier for delivery of goods and documents in the city. This of course has an impact that motorcycle taxis also compete with special courier and logistics services for the inner city area and also taxis

3. Ojeg used to be a full time self employment aka self-employment by occasionally visiting other informal jobs such as security guards or odd jobs, now turned into employees (flexible time). Can still be odd jobs or servants, but there is a permanent status as an employee. The impact of labor with monthly income of around 1-2 million will be tempted to change jobs to become a taxi driver, business owners who pay 1-2 million in salary to their employees will start thinking again to retain their employees.

4. Ojeg used to be dominated by men is now no longer relevant, because women can also be a taxi driver, the impact is more and more consumers choose to choose a female or male driver.

5. Ojeg used to tend to be no guarantee of work safety, sop, work facilities, communication allowances and reporting facilities and working order systems, now it is more convenient and effective.

For other industry players such as couriers, taxi and post, they must improve themselves and arrange tactics because the ojeg which used to be different industries are now head to head with them.

The government and law enforcers must work to prevent social friction and criminal acts from parties who cannot think rationally and tend to be emotional about this phenomenon.

The government must also pay close attention to the sweet phenomenon of the motorcycle taxi industry in Indonesia, as evidenced by foreign players namely grabe bike that have entered Indonesia, need certain steps to control foreign investment in the motorcycle taxi industry especially with the commencement of the era of the ASEAN economic community (readiness to go to the salted players)

Do not forget to mention also that ICT can change the industry that is underestimated into the spotlight.