Technology and methods applied by Indonesian to overcome peatland fires 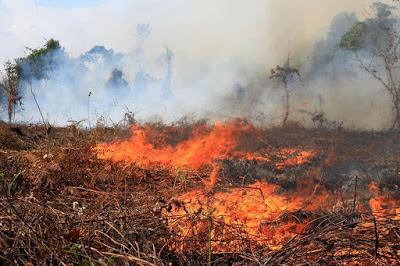 Why are forest fires always happen, so it is embarrassing to neighbouring countries, it seems there is no anticipation ... even though there are already many technologies applied to deal with forest fires

First we have to know the first reason why fighting forest fires in Indonesia is more difficult than other countries, because most of the forests in Indonesia are peat forests, which are made of rotting leaves and other organic material whose depth can reach 10 meters.

When peat dries due to low water levels, the fire can spread rapidly through roots that are underground. The fire then burns down to the lower parts of the plant and bushes. So, actually never really can know the location of the fire, which can only be seen only smoke.

Although difficult, but the Indonesian people never give up, many ways and efforts are made

Advise of any technology and method used, the following are explained one by one:

1) Weather Modification Technology (TMC) is an engineering technology that can create artificial rain. In tackling forest and land fires, TMC conducted by the Agency for the Assessment and Application of Technology (BPPT) maximizes fire fighting, artificial rain can be carried out on condition that the water content in the region reaches 75 percent. When sprinkled with salt, the clouds will rain.

2) Irrigate peatlands, flooding them, so that water can enter the root pores to put out the fire.

4) Digital Fire Extinguisher To make it easier for the community to do their own extinguishing in the event of forest and land fires, the University of Tanjungpura (Untan) made a forest fire extinguisher with a digital system called Nyapar.

Nyapar is a digital device that can be controlled and is designed portable so that it makes it easier to extinguish fires. Nyapar can spray water with a range of 30 to 50 meters and the greater the driving force of the engine, the range can be even further.

6) Watering to the bottom is made like mush, until there is no smoke anymore. This method is quite effective.

8) Making water reservoirs, or reservoirs, in fire-prone areas making it easier to access water if needed for extinction. This reservoir is necessary because it will be difficult to find water in the dry season, especially on burning peat

Keep the spirit for the Government, TNI, POLRI and the people of Indonesia, hopefully the land fires can be resolved soon.


https://theconversation.com/ why did you extinguish the fires of the forest in Indonesia-so-difficult-a-story-personal-story-forest-forest 122476
Location: