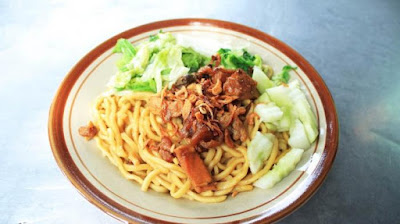 But a simple chicken noodle shop located in one corner of the traditional market is always crowded with buyers.

A serving of fried chicken noodles contains noodles and mustard greens chopped with chicken meat and topped with fried onions. The texture of the noodles is quite chewy and the taste is tasty, combined with the chopped chicken topping which tastes savory and slightly sweet. In a day, chicken noodle stalls, which are open from 09.00 am to 02.00 this afternoon, can sell between 500 and 700 servings of chicken noodles.

For that much portion Wanto must prepare at least 50 kilograms of chicken as the topping. In addition to providing fried chicken noodles, Mekaton chicken noodles also provide chicken noodle soup. For the price issue, you don't need to worry, because you can enjoy one portion of chicken noodles (fried or soup) for only Rp. 9 thousand. Although always crowded with buyers from various regions around Yogyakarta, Wanto has not yet opened a branch. Rahman (22), a student who lives in Depok, Sleman, said that even though he traveled a considerable distance, he felt no loss.

"Although the journey is quite far but it's comparable with the taste of chicken noodles, especially in Yogyakarta also not too many who sell fried chicken noodles," he said.