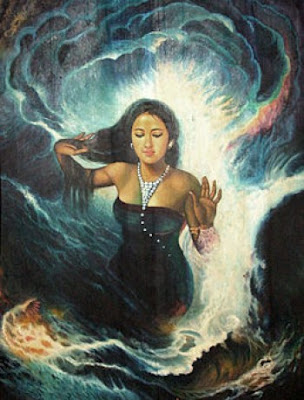 Once upon a time, there was a beautiful princess named Kadita. Because of her beauty she was called Dewi Srengenge which mean The beautiful sun. Her father was King Munding Wangi. Although he had a beautiful daughter he is always unhappy because he always expected to have a son. The King decided to marry Dewi Mutiara, and he had a son from her. He was very happy. Dewi Mutiara wanted her son to become a king in the future so she must make sure of it. Dewi Mutiara came to the king and asked him to send away his daughter. Of course, the king did not agree. "It is ridiculous, I will not allow any body doing such cruel thing to my daughter", said King Munding Wangi.

When Dewi Mutiara heard the answer, she smiled and said a sweet thing until the king has not anger anymore. However, she kept her bad intention deep in her heart. In the morning before the sun raised, Dewi Mutiara sent her maid to call a black magician. She wanted the black magician to curse Kadita, her step daughter. “I want her beautiful body full with scabies and itch. If you succeeded I will reward you with the present you never thought before". The black magician did the queen ordered; in the night Kadita body has been full with scabies and itch. When She waked up, she found her body was smell stinky and have a ulcer all over her body. The beautiful princess cried and did not know what to do.

Finally he must agree to send her only daughter to leave the country. The poor princess went alone, she didn't know to where she should go. She almost could not cry anymore. She had a noble heart. She did not have any bad feeling with her step mother, instead she always asked the God to accompany her passed her suffer. Almost seven days and seven nights she has walked until she came to south ocean.

She looked at the ocean. It was so clean and clear, unlike other ocean which have a blue or green colour. She jumped onto the water and swim. Suddenly when the south ocean water touched her skin there was a miracle happened. Her ulcer has gone and there was no sign that she has ever had a scabies or itch. Even more she became more beautiful than before.

Not only had that she had a power to command whole of the south ocean, now she became a fairy called Nyi Roro Kidul or The Queen of South Ocean who lived forever. This is the most spectacular legend until now in the modern life.

Many people from Indonesia or from other country have admitted that they have met the beautiful queen wear a traditional dress of Java. One of the famous beach hotel has made a room specially for Nyi Roro Kidul.