The Mystery of the Mount Merapi Imaginary Line, the Palace, to the Legendary South Sea Yogyakarta 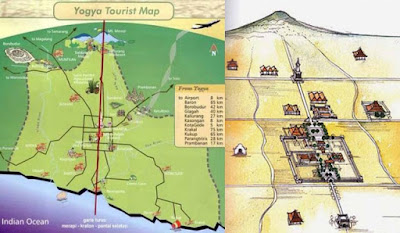 Palace is the center of the spatial concept in DIY. This regional layout has a special feature in the form of an imaginary line that is still a straight line, stretching from Mount Merapi, Kraton, to the southern sea. In addition to imaginary lines, Yogyakarta also has a philosophical axis namely Tugu, Keraton and the Krapyak Stage, which are connected in the form of roads. The philosophical axis symbolizes the balance between the relationship between humans and their God, humans and fellow humans, and humans with nature.

As quoted from page etd.repository.ugm.ac.id, the Krapyak Stage north to the Palace symbolizes since the baby from birth, growing up, settling down to giving birth to children. While from the monument to the Palace symbolizes the journey of humans back to the Creator. The Golong Gilig Monument and the Krapyak Stage are also symbols of the Lingga and Yoni symbolizing fertility. From all of that, Yogyakarta Palace is the center.

The Yogyakarta Palace is considered sacred because it is flanked by six rivers symmetrically, namely the Code, Gajah Wong, Opak Winongo, Bedhog and Progo rivers. There is also Mount Merapi and South Beach which are the end of the imaginary line, with the Palace located right in the middle of both. Long before the Sultanate was established, Sri Sultan Hamengkubuwono I had thought of the concept of a unique city arrangement. Mount Merapi, a Java balancing stake It is said that a long time ago, the island of Java was out of balance as it is now. But tilted to the west. This is because in the far west, there are many mountains, while in the middle and east there are none. Lucas Sasongko Triyoga in his book entitled Man of Java and Mount Merapi said that to balance the island of Java, the Lord Krincingwesi then ordered to move Mount Jamurdwipa in the west of Java Island, to the middle of the island of Java, where Mt. Merapi is now located. But the removal of Mount Jamurdwipa is facing obstacles.

One of them because there are two magicians who live in the middle of the island of Java. Both of them are sisters from Empu Rama and Permadi. They asked both of them to move because this place would be the place where the Earth Stabilizer Stakes were embedded in Java. However, the two masters refused on the grounds that they were working on a keris that had to be done to completion. If not, there will be chaos. Hearing that, the Lord Krincingwesi was angry and dropped Mount Jamurdwipa on them. These two masters were buried alive. Both of their spirits are believed to be the guardians of Mount Merapi until now. Both of them even served as kings of all subtle creatures in Merapi.

While the fireplace where they made the keris, became the forerunner of naming Merapi. This fireplace is also believed to be the forerunner to the hot lava of Mount Merapi. Mount Merapi originates from the Himalayan Mountains Another story says that Mount Merapi used to come from parts of the Himalayas. The story is almost the same that the gods at that time needed a stake to balance the island of Java. However, this story is somewhat different in terms of the origin of the formation of Mount Merapi. It was stated that Bathara Bayu was instructed by Hyang Guru to take part of the Himalayan Mountain to be plugged into Java.

But on the way, parts of this mountain fell in the western part of Java Island. The base of the Himalayan mountain fell to pieces and spread to a number of mountains in West Java such as Mount Guntur, Mount Pangrango, Mount Tangkuban Perahu, etc. Bathara Bayu then flew to the central region of Java. Then drop the hull part of the Himalayan mountain. The fall was so hard that it fell to pieces too. This became the forerunner of a number of mountains in the central region of Java. Such as Mount Slamet, Sindoro, Merbabu, Sumbing, Lawu and Mount Merapi itself. While in the east, the Himalayan mountain section turns into Mount Semeru, Mount Mahameru and a number of other mountains. Thus various mythological stories that spread as folklore. You may believe it or not
Location:

Post a Comment for "The Mystery of the Mount Merapi Imaginary Line, the Palace, to the Legendary South Sea Yogyakarta "