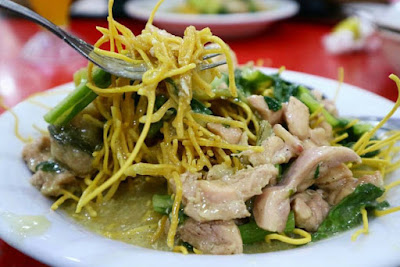 Do you know that the actual "Titi" in the name Mie Titi is not the name of a typical noodle dish. Titi is actually the familiar greeting name of the late Ang kho Tjao, father of Freddy Koheng, owner of the Mie Titi business who first stood on Jalan Dr. Wahidin Sudirohusodo, who was once named Jalan Irian. In addition, Titi in Chinese also means younger brother.
At first Mie Titi was made by Ang Kho Tjao who is a citizen of Chinese descent who lives in Makassar. Ang Kho Tjao then passed on these culinary recipes to his three children and made Mie Titi become known since the 1970s.

For Makassarese Chinese citizens in the 1950s, especially in the Chinatown (Gowa District), Ang kho Tjao, was a typical noodle seller at that time the surrounding residents called it om pancakes, namely noodles fried in a little oil, then pressed in a pan. until flattened to resemble an omelette.

There is a difference between the two noodle dishes. Grilled or fried noodles are typical Chinese dishes of Kwantong (Cantonese) while Fried Noodles which are a bit soggy are Chinese-Hokkien dishes. Until now, Mie Titi 'dish is better known as dry noodle dish, that is because the noodles are served not in a wet state, such as soup noodles, or meatball noodles, but in a dry state.

Over time, Ang Kho Tjao then passed on the knowledge of the recipe for making Mi Titi (Dry Noodles) to his three children namely Hengky, Awa ', and Titi, where they each continued the culinary business. Out of the three Ang Kho Tjao children, four restaurants with dry noodles still exist today, namely: Titi Noodles, Awa Noodles, Hengky Noodles and Anto Noodles. Although slightly different, but all of these restaurants do not eliminate the distinctive taste of the basic recipe given by Mie Titi given by his father.

In the era of the 90s, Mie Titi increasingly developed and became a family business. According to Freddy, currently Mie Titi has more than nine branches. Three branches of Mie Titi located on Jl. Boulevard-Panakkukang, Jl. Datu Museng, and its Center on Jl. Irian, managed by Freddy Koheng himself. The other branch is managed by Freddy's younger siblings who are already married and co-operate the restaurant franchise.
Although the "derivative" dry noodles from Ang Titi Kho Tjao have many varieties, such as Awa Noodles, Anto Noodles, etc. but Mie Titi is still the most popular among all, and its branches are already outside of Makassar. For the price itself, it is still relatively cheap when compared to the flavor offered. For 1 serving of Titi Noodles, the price is currently varying between Rp. 20,000 to Rp. 23,000 per serving. A little advice if you want to enjoy this dish, it is better if you want to order Titi Noodles, just choose the portion of Jumbo. The problem is the price difference between the Jumbo and the usual is only Rp. 1000, but the portion size is very different.
Location: