Piaynemo, the Ideal Destination for a Short Vacation in Raja Ampat 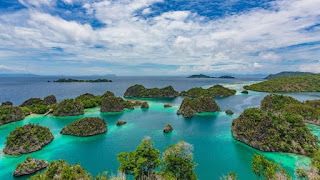 If you don't have much time to visit Raja Ampat, for example, only for 1 day, you don't need to worry because you can visit Piaynemo. Piaynemo and the surrounding islands offer a natural, cultural and culinary experience that is worth a try. Although only visiting one place, there are many natural attractions that you can visit. Once a boat ride to Piaynemo, you can find several points at once in just one day. Curious about what places can be visited in Piaynemo, here is a full review.

One destination can be reached in about 2 hours using a fast boat from Waisai. At this tourist spot, you can enjoy local cuisine and drink refreshing coconut water. If you like taking pictures, don't forget to pose on the small pier on this island that directly faces the sea.

Fam Island is an area that is protected from illegal or illegal fishing. This conservation area arose because of the agreement of the indigenous people of Saupapir Village, Fam Village, and Saukabu Village-West Waigeo District. The Indigenous Peoples of the three villages agreed that this area was a Conservation Area that was managed by the community with 2 zones, namely the utilization zone without fishing activities ie in around the Bamboo Island and the Pianemo archipelago and the zone used as a fishing area without damaging equipment and traditionally managed

Beautiful beach views are certainly able to hypnotize anyone to play sand and enjoy the splashing of small waves. Besides that, you can also swim. If you want to linger in this village there is also a guest house that faces directly to the beach so that when you wake up you can directly play water on the beach

This destination is near Piaynemo. Panorama presented at Telaga Bintang is also almost the same, namely seeing small islands from above the height. But when compared to Piaynemo, this lake has not been equipped with stairs but there are already stones which are cemented as footrests. Even though it's not too tall, be careful when climbing because there are lots of sharp little rocks. This place is called the Star Lake because it offers a view below that resembles a star-shaped lake.

Pianemo became popular after the President of Indonesia, Joko Widodo uploaded photos during his visit. Indeed, the view presented at Pianemo is not as large as Wayag but still presents a beautiful panorama. The path to Piaynemo has been equipped with better access than Wayag. During the climb, you will also be treated to views of tropical forests. Although the hiking trip is quite tired, but this forest is very fresh and comfortable to pass.

This island is a little distance from Piaynemo and can be reached by fast boat in about 1.5 hours. But the distance is closer to Waisai, which is the initial place of departure. You should stop at Friwen Island to refresh your body after a tiring climb. For tourists who vacation with children, they can play swing before playing water
Location: