Curious about Who invented the noodle, Italy or China? 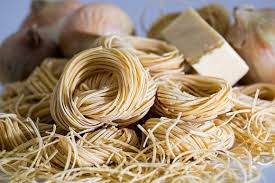 Have you ever peered into your pantry and wondered which came first, pasta or noodles? And where? Did the Chinese invent pasta or did the Italians invent noodles? Oh the confusion! Food mythology has contained many an inaccurate theory about how the two similar foods have made their way across the earth to each zone, with one common tale detailing how the Venetian merchant, Marco Polo, brought pasta from China to Italy after an eastern adventure (that one we can lay to rest – it was just a clever marketing ploy, as John Dickie explains in the new SBS series, Eating History: Italy) In 2005, the world’s noodle enthusiasts got really excited when Chinese scientists unearthed a 4000-year-old bowl of noodles at an archaeological site at Lajia, China.

This discovery appeared to mark the earliest example of the noodle in history: surely it could put the noodle v pasta debate in your head to bed? Scientists believe the noodles found may have been made from two kinds of millet, which are similar to but not the same as wheat grains (which is what modern Chinese noodles and European pasta is made from). But since the discovery there’s been quite a lot of debate about what it means – for one thing, millet, being gluten-free, isn’t suitable for making noodles as we know them.

Respected historian Françoise Sabban has written about the scientific controversy that followed the initial announcement. SBS got in touch with one of the Chinese scientists at the centre of the discovery,

Houyuan Lu of the Institute of Geology and Geophysics at Beijing's Chinese Academy of Sciences, to ask if the find was proof that China invented the noodle. Lu simply replied: “The question as to which people invented noodles is unimportant. Regardless of whether noodles originated in China or elsewhere, their emergence was most probably even earlier than previously thought”. So the short answer is…not sure.

SO MANY NOODLES!
Oodles of Noodles map Discover 31 new recipes and a bowl-ful of noodle stories in our interactive map. Feeling frustrated (and hungry) yet? You’re not alone. Many people in the USA use the term “noodles” to refer to pasta, adding to the confusion. And in Europe, there are many dishes where it’s hard to tell where the starch ribbons involved fall on the noodle-pasta spectrum. In a determined attempt to clear up the murky mystery about whether noodles and pasta are actually Italian or Chinese, American food writer Jen Lin-Liu set out on a six-month fact-finding trip from Beijing to Rome throughout 2010 and 2011.

The American travelled along the ancient trading route, the Silk Road, to China through Central Asia, Iran, Turkey and Greece before arriving in Italy. “Through my research and the journey itself, I was able to establish that the earliest documentation of noodles was in China and it probably came around the third century [300-200] BC,” Lin-Liu, author of the book On the Noodle Road tells SBS. Her estimations also tie in with the earliest written record of noodles, included in a book dated back to the Han dynasty (206 BC – 220 AD) in China. Lin-Liu explains that we also know the Chinese were probably the first peoples to eat noodles, given that “on the western side of the world, the earliest documentation of noodles is dated at around 500 and 600 AD”. However, Lin-Liu stresses that doesn’t mean China “invented” what we now consider to be pasta. “We aren’t sure if the noodle developed in the west separately, after it appeared in the east or if pasta, as we know it, even relates to the noodles that were first eaten in China. There could have been two different food traditions that developed side-by-side in opposite parts of the world. “But based on my journey, it seems that Chinese noodles made their way throughout Asia, Korea and Japan, all through Central Asia and then through to Turkey. It makes sense as that was the way migration patterns moved and trading routes went.” Lin-Liu explains that as for Italian pasta, “Middle Eastern noodles, which developed after the fifth century, most likely influenced Europe”.

PASTA PRIMER
It was all a lie: the scandalous history of pasta From whimsical marketing ploys to an outrageous carbonara, humble pasta has had a bumpy ride through the ages. Food historian from the University of Adelaide, Professor Barbara Santich, confirms the reasoning of Lin-Liu’s historical account, concluding that no one knows who technically ‘owns’ the noodle because there is a lack of definitive evidence specifically showing its origins. However, Santich’s historical dates differ somewhat. She says that the earliest accounts of the noodle dates back to China in the fifth century [500-401] BC.

Santich adds that there’s no mention of noodles in the Mediterranean until around five centuries later (she also reminds budding food historians that Italy, as we know it, didn’t evolve into the Kingdom of Italy until the 1860s). “Chinese noodles were made with soft wheat as China only had soft wheat back then: they couldn’t have created dried pasta, [which usually requires hard or coarse wheat to make],” says Santich. “So Chinese noodles didn’t evolve into what is now known as Mediterranean pasta. And pasta didn’t make its way from China to Italy.” “Foods can arise in different places at different times with no connection to each other”. Santich explains that the origins of European pasta date back to an early mention of the word ‘itri’ or ‘itria’ (meaning a flour and water dough that’s rolled into thin sheet and cut into strips) in Greek literature. Noting that Syria was once a Greek colony, she explains that these mentions later transformed into Arabic. “The Arabs also conquered Sicily and southern Italy, so it’s possible the Arabs took pasta to southern Italy and Sicily and it was exported from there…The Mediterranean is a very mixed up world.” Professor Santich concludes that variations of pasta then spread throughout Europe for centuries to come, evolving into the forms we now identify as vermicelli, macaroni, tortellini and ravioli.

So if noodles and pasta are more like friends than family, why do we all think they’re related? Lin-Liu says it has to do with the term ‘noodle’ itself. “ ’Noodles’ is a tricky term that was contrived by the west and implies a long stringy substance,” Lin-Liu explains. “But in China, a noodle is not called a ‘noodle’ as it is called in the west. It is called ‘miàn’ or ‘mein’. Miàn is not based on the shape of the food you are eating but on the fact it is made from flour in a liquid. So in this sense a dumpling and the ravioli are both are miàn.” So the food grouping of noodles and pasta are similar – both miàn – even though they aren’t related. Where does that leave us as we keep staring at our pasta and noodle packets? Santich says time spent wondering who owns the ‘noodle’ would be better spent pondering something else: “We just don’t know and it’s a pointless argument”.

Lin-Liu however, sleeps at night knowing that Europeans eat pasta that was (more or less) developed on the western side of the globe many years ago and in the east, Asians consume noodles that probably came from China, long before she was born. “The message I received along with my journey in my quest to discover the identity of the noodle was that no one culture ‘owns’ a particular food, just because its peoples are eating it,” says Lin-Liu. “The commonalities between distinct cultures lie in the fact that people are brought together by food and hospitality. Among people of all different religions and cultures and nationalities, we all share something.”