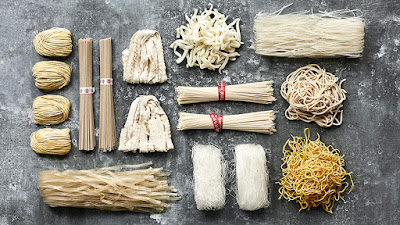 Noodles originated in northern China during the last half of the Han Dynasty (206 B.C.E.–220 C.E.) when large-scale wheat grinding became available, providing flour to make mian, mein, or mi, the Chinese word for noodle. We learn about the earliest noodles from Shu Hsi, one of China's most learned men, who in 300 B.C.E. wrote a fu or rhapsody on noodles, in which he provided detailed recordings of noodle making. For centuries, la mian or hand-pulled or hand-swung noodles were popular. The chef grasped a length of dough between two hands, stretched it with a toss of several feet, and repeated the tossing and extending until the dough divided into thinner and thinner strands, resulting in soft, smooth, and chewy noodles. In the centuries that followed, variations of noodle making were introduced.

In the Tang Dynasty (618–907 C.E.), noodles were first cut into strips. Then, in the Yuan Dynasty (1271–1368 C.E.) the making of dried noodles began (Ang, p. 46). With travel and trade, noodles migrated into the rest of Asia. Noodles moved from China to Japan to Korea and to Southeast Asia. The Chinese influence is first evident in the name for noodle. The Chinese word for noodle, mian or mien or mi became men or menrui in Japan, myun in Korea, and mee in Thailand. It was even believed that Chinese noodles moved into Europe. According to legend, Marco Polo discovered pasta in China and took the idea home.

But it was misinterpretation of his records that started this story because pasta was known to the ancient Greeks and Romans—a culinary evolution independent of China. Report Advertisement Asian noodles are distinctive because of the assortment of flours used. The notion that rice is the dietary staple in China is misleading as the majority of China eats wheat products. Southern China with its monsoon rains provides perfect rice-cultivating conditions while the large area north of the Yangtze River is excellent for wheat.

In China, the most popular noodle is the regular gan mian or mian, made of wheat flour and water. Salt is sometimes added, and cornstarch is sprinkled on fresh noodles to keep them from sticking together. Dried wheat noodles are either 12-inch lengths or, in the case of thinner noodles, nest-like swirls. Egg noodles or dan mian, occasionally flavored with shrimp and yellowish in color, are popular in southern China. Chow mian, or stir-fried noodles, is perhaps the most popular noodle dish. Other noodles eaten in China are made with rice flour or mung bean flour. Dried rice noodles, mi fen, or rice sticks or rice vermicelli come in different widths, but in China, the thin, white opaque white noodles are most popular; they are softened in hot water or immediately puffed up when tossed in hot oil. Sha He fen or rice noodles from the southern village of Sha He, or vermicelli sheets, are wide, slippery, rice noodles sold in large squares. These fresh noodles made from rice flour, cornstarch, and potato starch are used in soups and stir-fried in a dish called chow fen. At other times, the sheets are filled with beef or shrimp and then rolled and steamed. Mung bean noodles or fen si (literally translated 'powdered silk') or cellophane noodles, bean threads, glass noodles, or vermicelli are from the starch of mung beans. They rehydrate in hot water to a slippery, translucent noodle, or puff up when fried in hot oil.

Report Advertisement Japan is the most noodle-or menrui- consuming nation on earth. Japanese noodles include wheat-based noodles found in Osaka or southern Japan, and buckwheat-based noodles associated with old Edo, now Tokyo, and the north country. Wheat noodles include udon, which are thick round, square, or flat noodles; kishimen, which are also wide and flat; hiyamugi, which are round, very slender and served cold; somen, which are even more slender and slightly moistened with cottonseed or sesame oil, and also made with tea powder, cha somen ; egg yolk, tomago somen ; or tinted with red perilla oil, ume somen. Buckwheat-based noodles, or soba, are mixed with wheat flour. These noodles are long, thin, and gray-brown in color. A variation of this noodle, made with green tea, is cha soba.

Ramen, the most popular noodle in Japan, is of Chinese origin. These noodles are steamed and dried, making them easily rehydrated for quick eating. Harusame or 'spring rain' or cellophane noodles are made from Japanese potato starch or Chinese style from mung beans. Finally, shirataki or 'white waterfall' is made from the starch of the devil's tongue or Amorphophalus konjac. Udon is usually served in broth with chopped scallions or shichimi or a seven-spice mixture consisting of red pepper, sansho or Japanese prickly ash pepper pods, dried mandarin orange peel, black hemp seeds, dark green nori seaweed bits, and white sesame seeds.

Soba is traditionally served on bamboo slats inside a square wooden box with a dipping sauce made of dashi or a bonito flake-kombu seaweed broth. If the noodles are presented cold, then the dipping sauce may be accompianied by sliced scallions, wasabi or Japanese horseradish, and grated daikon or Japanese white turnip. Somen is usually served cold. Shirataki comes packed in lime water and needs to be parboiled before using in sukiyaki, a popular beef dish made in a shallow cast-iron pan. Report Advertisement Korea's proximity to Japan and China is reflected in the noodles eaten there. Koreans enjoy buckwheat noodles or naeng myon cold, much as the Japanese do, but with some unique variations.

The Korean version of the Chinese mung bean noodle is tang myon, which is made with sweet potato and cornstarch. These grayish, rubbery noodles are used in stir-fries. Southeast Asia Vietnamese noodles come in various sizes and are prepared in different ways. Bun or rice vermicelli comes in small and thin sizes, and in much wider widths. Small or thin noodles are used in salads, bun bo, while the much wider noodles are found in soups. Banh pho is a flat rice noodle that looks like linguine and comes in widths of small, medium, and large, and is used in soups and stir-fries.

Vietnam's most popular soup is pho bac, or rice noodles in beef soup served with slices of beef and fresh herbs. Mi soi, thin egg noodles, is of Chinese origin. Bun tau or mung bean noodles, cellophane noodles, bean threads, or glass noodles are made from mung bean starch. After these thin, wiry white sticks are softened in hot water, they are used in soups, stir-fries, and fillings. In Thailand, noodles also come in every size and shape, from flat white rice noodles or gway tio, to brittle white rice stick noodles or sen mee, to glass-like bean thread noodles or woon sen. Gway tio can be served in stir-fries or soups. Sen mee is served fried, stir-fried, or in soups. Woon sen is used in soups and stuffings for its slippery texture.

Popular dishes in Thailand are the pad thai noodle, which uses thicker-width rice noodles, and mee krob, which uses a thin rice vermicelli that is fried. Report Advertisement In other parts of Southeast Asia, variations of the noodles found in China, Vietnam, and Thailand are eaten. In Malaysia, rice vermicelli noodles are combined with a tamarind mackerel sauce for laksa asam. In the Phillipines, rice vermicelli is stir-fried with meats and vegetables to make pancit.

In Singapore, char kway teow or flat white rice noodles are stir-fried with seafood, while egg noodles or Hokkien, yellow noodles, and rice vermicelli are stir-fried in the same dish with meat, seafood, and vegetables for Hokkien mee.

Though there may be similarities in preparation of the noodle dishes, the flavors are distinctive of each region because of the indigenous ingredients used. Ceremony and Symbolism Noodles not only play an important role in Asian daily eating, but contribute to rituals in honoring the dead, celebrating birthdays of the living, and marking other special occasions.

They are brought to the grave of a deceased family member or friend on the twenty-fourth day after the first of each lunar month. It was Emperor Chu Yuan-Chang of the Ming Dynasty (1368–1644) who built a t'ai miao or shrine to the imperial ancestors where he placed spiritual tablets of his paternal relatives for four generations. Offerings of foods, including noodles with sesame oil, were brought to the shrine on the appropriate day.

After the birth of a child, especially a son, the mother's family sends over gifts for the new mother of wheat flour or wheat flour noodles, chickens, and a basket of eggs. For the birthday celebrant, a plate of long thin noodles expresses a wish of long life. Long-life and happiness wishes with noodles continue with the New Year feast. Report Advertisement In Japan, soba is usually the final item eaten on New Year's Eve. This dish is called toshi-koshi which means 'year-passing' and symbolizes the old year passing. It is customary for a person who moves into a new neighborhood to make gifts of soba to households next to and in front of one's new house. The word for soba is a homonym of the word soba meaning 'near' or 'next to'.