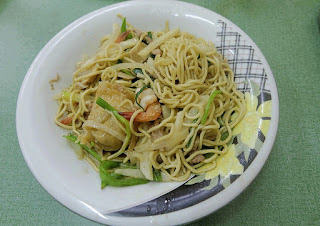 The Chinese community in the Indonesian capital knows where to go for great Hakka food: a small restaurant with no signage down an alley has been serving authentic fare since 1925, and educating its customers about Chinese culture A Chinese-Indonesian diner who asks to be identified only by his first name, Ben, has been a regular at Wong Fu Kie, a Hakka restaurant in Jakarta’s Chinatown, since his former lecturer took him there some 20 years ago.

The place is legendary among the Indonesian capital’s Chinese community, and has been open for almost a century. Ben’s favourite dish is mun kiaw mien, the restaurant’s signature braised noodles with shrimp, pork, fried wonton, button mushrooms, celery and jicama. Wong Fu Kie is located deep down a narrow, nondescript alley beside a branch of Bank Central Asia. It moved to its present location in 1975.

Making it even harder to find, the restaurant lacks any signage. Inside, the decor is basic and unpretentious. One of the oldest known mentions of the restaurant was an article in Indonesia’s now-defunct Star Weekly magazine on February 14, 1953, which translates as: “In Jakarta, there are hundreds of noodle shops, selling mostly ordinary fare, but there are one or two that stand out. The first, and the oldest, is Wong Fu Kie in Kongsi Besar.

Wong Fu Kie’s noodles are renowned for being thin, chewy, with a seasoning of soft, minced pork, that is sprinkled on top of the noodles.” Why Hakka cuisine is so beloved in Hong Kong, but might not last As recently as several years ago Wong Fu Kie – which closes at 5pm – was not such a bustling place, Ben says, but “then it got popular on social media”. University student Intan Purnamasari first came across Wong Fu Kie on social media when she saw a video by vlogger Nex Carlos, who highly recommended the restaurant. “It’s already hard finding Chinese food that tastes authentic,” Intan says. The restaurant’s owner, Tjokro Indrawirawan Kusnadi, has also turned to social media to promote Wong Fu Kie.

He regularly takes photos of diners – many of whom are families with young children and grandparents – sitting around the tables enjoying the food and posts them on Wong Fu Kie’s Instagram page, which has close to 1,800 followers. Tjokro says he knows for certain that Wong Fu Kie opened in 1925 because of an old photo he has seen dated 1942 commemorating its 17th anniversary. Tjokro – also known by his Hakka name, Thung Tjok Jin – was born in Jakarta to a Hakka father and mother. He is from the third generation of the family that has run Wong Fu Kie, but employs four cooks rather than prepare the dishes himself. The restaurant’s founder, Tjokro says, was his maternal grandfather, after whom the restaurant is named. Wong Fu Kie’s daughter, Wong Tjaj Jin, took over the family business in 1965 when the founder retired. The old people; they have a Chinese face … but they don’t understand anything.

What is pek cam kee? What is wong san? They don’t know. I regret that. Why don’t you know our culture? Tjokro Indrawirawan Kusnadi, owner of Wong Fu Kie Tjokro trained as a civil engineer but says it would have been a pity to abandon the restaurant, so he took it over in 2005 when his mother became too old to continue running it. Two years later, in December 2007, award-winning Indonesian novelist and food writer Laksmi Pamuntjak reviewed Wong Fu Kie for her book Jakarta Good Food Guide 2008-2009.

Laksmi wrote that “it is all about the food, Hakka home cooking at its most soulful”. Hakka – meaning “guest people” are a Han Chinese group who originated in northern China, but migrated south in waves over the past 2,000 years, to southern China and farther afield. Hakka food is salty and fragrant, and the dishes tend to be heavy and hearty. Tjokro says the dishes at Wong Fu Kie have always being authentic and have not been modified since the restaurant opened more than nine decades ago. “All Hakka cooking pretty much includes red yeast rice, garlic, arrack and sago,” he says. “Those are more or less the four characteristic elements [of Hakka food].” Another popular dish at Wong Fu Kie is wong san fumak, or stir-fried eel with Indian lettuce and red yeast rice. First, the eel is filleted and then coated in sago flour before being deep-fried with the other ingredients. Pek cam kee, or Chinese steamed chicken, is another popular dish.

Mun kiaw mien is one such dish, Tjokro says. His mother created the noodle dish, he adds, claiming that it cannot be found at any other restaurant. Tjokro says that mun-cooked (braised) dishes, such as mun kiaw mien and mun tahu (braised tofu served with minced chicken or pork) are specialities at Wong Fu Kie. The long and winding road back to a proud Chinese heritage Bloggers have also reviewed wong san fumak, pek cam kee, and sweet and sour pork. Since new customers tend to try the dishes they have seen recommended on social media, then recommend them, other dishes on the menu tend to be overlooked, Tjokro says. So he tries to recommend alternative dishes before a customer places an order.

Diner Hendrawati Subali, who is at Wong Fu Kie with her husband, mother, and two children, says that despite its basic set-up, many of the customers at Wong Fu Kie are upper-middle class. She can tell by the way they dress, she says. Tjokro admits that exposure on social media has been good for business, because it has exposed Hakka food to many curious young people who otherwise may not have heard of it. On the other hand, Tjokro laments that the ethnic Chinese Indonesians who turn up at Wong Fu Kie tend to be ignorant about their own culture.

He blames the policies of former president Suharto (1967-1998) and his New Order regime, which forbid learning of Chinese language and dialects. The LA native in Hong Kong who takes visitors to eat snake soup “The old people; they have a Chinese face … but they don’t understand anything. What is pek cam kee? What is wong san? They don’t know.

I regret that. Why don’t you know our culture?” Tjokro adds that he has even spoken to ethnic Chinese customers who don’t know what Hakka means. “They didn’t know that Hakka is a tribe. So we explained that Hakka is a tribe, just like the Javanese and Balinese,” he says. Tjokro hopes that Indonesia’s ethnic Chinese citizens try to remember their history and traditions. “We are proud of being Chinese.

Here in Indonesia, even though we’re a minority, we supposedly have to guard our traditions,” he says. “Understand what that tradition is. Go and eat Chinese food.”
Wong Fu Kie located in  Perniagaan Timur II/22, Pasar Pagi Lama, West Jakarta, tel: +6221 6906374. Open 8am to 5pm. Early booking is advised.